In a lifetime we can see many changes.  Both my parents were born before the airplane and the automobile.  My mother lived 94 years and she saw many changes in her lifetime.  I remember being with her in the cotton field when the first diesel locomotive passed through Greene County.  As I remember it, the train was north bound and after it passed on its way to Rector, we could again hear the pounding of the ice plant in town.  A person did not have to inquire the way to Rector, for the very music in the air becomes, more and more melodious as you drew near to the ice plant.  If only I could have gone into that engine room to see and hear up close the various sounds coming form the engine that was pounding and thumping and uttering a groan of protest, as it compresses some sort of gas.  This would have lasted a life time, however my vivid imaginations is  full of these sounds.  I remember her telling me that I would see a lot of changes in my lifetime.

Later, our family was visiting the Charlie Kirkland family of the Heubner Community when an airplane flew above with a white stream following it.  My mother told me that it was a jet airplane.  That was the first jet airplane I ever saw.  Now I can go out side and look up in the sky and see a jet airplane any day.  First and Last!

BUT, last month I spent two days following the Challenger.  From Cape Girardeau, MO to Brinkley, AR, I could not get enough of this big engine.  In Bernie, MO, I started putting coins on the rails in front of this big engine.  My mother was born in Bernie and her mother is buried near the railroad, and I will keep these coins for my mother.  From Bernie to Hickory Ridge I placed over a thousand coins on the rails.  If the train had speed when it went by, I was lucky to find half of the coins; they are still there for someone to find and pick up.

From Bernie, as I remember it, the train was south bound and after it passed on its way to Rector, I could not hear the pounding of the ice plant in town.  The old ice plant has became a memory, the rusty engine and its tall smoke stack are forever gone, and you can not listen to the chug-chug of the twin cylinder engine which used to produce ice at the old ice plant in Rector, Arkansas.  I remember mother telling me that I would see a lot of changes in my lifetime.

P.S.  The reason I placed so many coins on the rails was to give them to my RHS Web Site friends.  I had planed to attend the 2004 RHS Website Reunion in March and give them away there, but I will be in Pennsylvania.  If you would like to have one, send me a self-addressed stamped envelope and I will send you one.

A hyperlink to the original Raplin Ice Maker for the home. 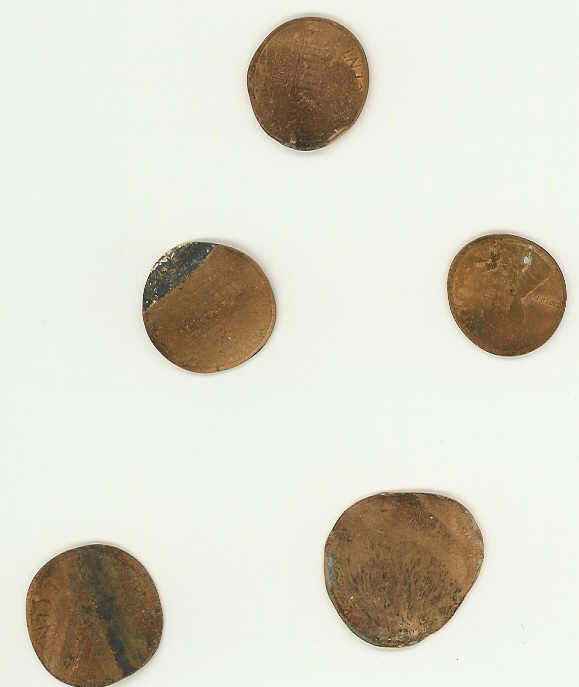 Why does a train whistle change pitch as it passes?
(Lansing State Journal, April 10, 1996)

Imagine that you drop a stone into a pond.  You could count the number of waves that pass an object like a reed in the water in a particular time interval (the frequency).  Now consider an object like a toy boat that is moving toward the point where the stone was dropped.  As a result of the motion, the number of waves that hit the boat in the same time interval increases.  That is, the frequency of the wave increases.

The same effect occurs in a sound wave.  If you are moving toward a train blowing its whistle, or if the train is moving towards you, the waves are compressed and the frequency of the sound waves is higher.  This results in a higher pitch.  If the train is moving away from you (or if you are moving away from the train), the frequency decreases, resulting in a lower pitch.  This is called the Doppler effect and can be observed in all types of waves, including light.